Relics from Camp is an art installation that involved years of research, visiting the sites of all ten Japanese-American Internment Camps; photographing the sites, collecting soil, and interviewing present day occupants. The Artist's parents accompanied her to make pilgrimages to the camps where they had been incarcerated during WWII with their families. Relics from Camp has been exhibited at The Japanese American National Museum in Los Angeles (JANM), the National Museum of Women in the Arts in Washington, DC, and the Harold Washington Library in Chicago. It is currently on display in Los Angeles at JANM.

Each time Relics from Camp is installed, Aono works with the local Japanese American community to collect artifacts former internees (and their families) have saved from the camps. Treasures such as hand crafted jewelry made from seashells, carved wooden game pieces, and hand sewn slippers made of scrap fabric were shared. Each Relic from Camp had a personal story which became the heart of the installation. Each Relic was place in a grid of soil from each camp, covered with glass panels that formed a large platform. As viewers walk over this platform, they trespass over the same soil that the Japanese American internees walked upon over half a century ago. Photographs of the Internment camps are projected on the walls, alternating present day images with historical photos taken during wartime. 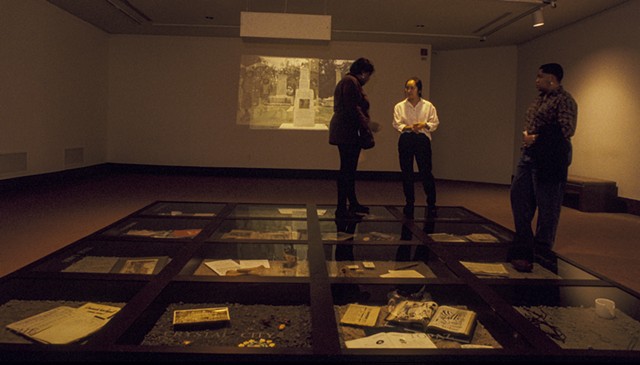